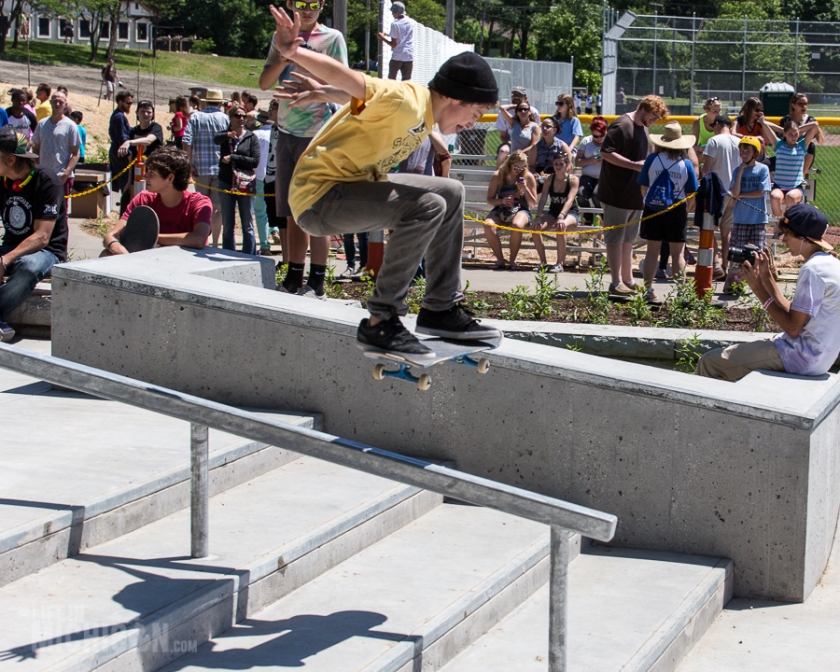 August 28, 2017 Rev. Marie Noelle Duquette We The People Comments Off on Reclaiming our space

Yesterday afternoon, (August 27th) I participated in a prayer vigil at the Ann Arbor Skate Park. It was sponsored by: The Interfaith Roundtable of Washtenaw County and the Interfaith Center for Spiritual Growth. About 350 people came to the park to address the recent acts of vandalism – swastikas and symbols of hate that had been spray-painted on the ramps and walkways in the heart of the park. The symbols had been painted over when we arrived, but those who frequent that park were still, understandably, shaken.

I was pleased to be invited to join with other faith leaders to speak to the growing division that is plaguing our country: to reflect, pray, sing, and consider next actions. Thanks to the dozen folks from King of Kings who were able to attend. For those who were not able to come, here are my remarks.

Timothy Snyder, the Levin Professor of History at Yale University, and a member of the Committee on Conscience of the United States Holocaust Memorial Museum, just published this book On Tyranny: 20 Lessons from the 20th Century. In it, he adapts lessons from history to the circumstances of today.

He explains his impetus for writing On Tyranny this way: “Americans today are no wiser than the Europeans who say democracy yield to fascism, Nazism, or communism in the 20th century. Our one advantage is that we might learn from their experience. Now is a good time to do so.

The 4th lesson in his book says this:

“Take responsibility for the face of the world.

The symbols of today enable the reality of tomorrow. Notice the swastikas and the other signs of hate. Do not look away, and do not get used to them. Remove them yourself and set an example for others to do so.”

He concludes this chapter with this:

“When the dissident thinker, Vaclav Havel wrote ‘The Power of the Powerless’ in 1978, he was explaining the continuity of an oppressive regime in whose goals and ideology few people still believed. He offered a parable of a greengrocer who places a sign reading, ‘Workers of the world, unite!’ in his shop window.

It is not that the man actually endorses the content of this quotation from The Communist Manifesto. He places the sign in his window so that he can withdraw into daily life without trouble from the authorities. When everyone else follows the same logic, the public sphere is covered with signs of loyalty and resistance becomes unthinkable. As Havel put it:

‘We have seen that the real meaning of the green grocer’s slogan has nothing to do with what the text of the slogan actually says. Even so, the real meaning is quite clear and generally comprehensible because the code is so familiar: the greengrocer declares his loyalty in the only way the regime is capable of hearing; that is, by accepting appearances as reality, by accepting the given rules of the game, thus making it possible for the game to go on for it to exist in the first place.’

And what happens, asked Haven, if no one plays the game?”

Together, we gather today at … a skatepark. A place where a game, of sorts, is encouraged. It is a game of youth, and agility, and grace. It is a game that exercises one’s body and mind, and in the euphoria of a perfectly executed hard flip or laser flip (a trick which sadly, does not use lasers), I imagine it might also exercise one’s spirit.

What this is NOT, is a place where we will allow a game of hate or intimidation to take hold. Today we gather together to reclaim this space, and to proclaim: